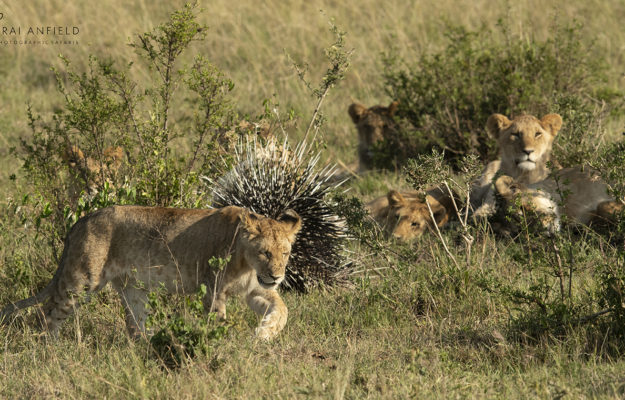 Did You Hear The One About The 7 Lions And A Porcupine?

No kidding!  While accompanying guests in the Masai Mara National Reserve this week, I came across seven lions – a mix of adult females and cubs – all looking a bit confused.  On their nightly wandering they’d come across a porcupine.  It must have seemed like a good idea to turn it into a midnight snack, but by the time the sun came up they still couldn’t figure out how to get past the arsenal of fierce quills to the tasty bits.

The wily old porcupine had jammed it’s vulnerable face and head deep into a bush, leaving only it’s heavily armed backside available to the lions.  One by one they prowled warily around it, testing out various theories of how to get past such spiny defences. None worked.

Not willing to give up on a potentially tasty treat, the lions did what they do best – worked together – arranging themselves in a circle around their prey, and offering no passage of escape. They now just had to wait for the porcupine to lose its nerve, try to run and they’d have it!  Hours passed in an epic Mexican standoff.

But the clever old porcupine obviously knew all about lions.  They just can’t help themselves, and one by one they fell asleep, as lions always do.  Seven hours after dawn the porcupine finally seized his moment, and as the lions snored their lunch crept silently away.

Patience isn’t just a virtue for the porcupine – as photographers, taking our time and really getting to know our subjects is vital to producing more insightful images that tell a story rather than just saying “I saw a lion”.  In this instance the dramatic fight and hunt we hoped for never actually happened, but we did gain a real insight into both the predators and prey in this fascinating encounter, and had a good laugh at the lions expense!

Big thanks to guides Mark and John for getting us to this extraordinary sighting.