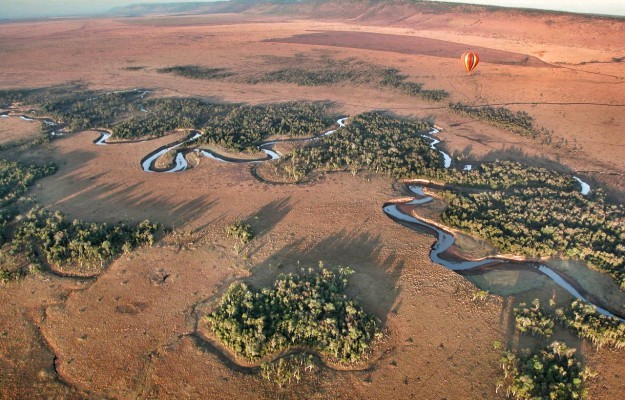 In a sleepy state of excitement we set off at 4.30am for my first ever balloon experience, we didn’t get far before we came across a pair of lions asleep just outside the camp. Both Lion and Lioness showed little bother and refused to move from the middle of the track, making us drive around them.

On arrival we were not allowed to set foot in the balloon until were had cleared our security check, which I was quite surprised at as I didn’t realise anyone was thinking of hijacking the balloon, but if so thankfully it had been prevented!

As the balloon came alive we jumped in ready for our adventure over land. Due to my fear of heights i felt very nervous looking over the edge, as we glided higher with ease. I found the burst of flames above my head quite unsettling as an irrational thought set in that I might be set alight by it. But after about five minutes i started to relax and found the floating motion quite amazing.

We glided at first low over the tree tops and above the antelope and zebra running underneath. I loved seeing all the tracks below crisscrossed over the plains, the regularly warn down paths of different sized animals showing the movement patterns across the Mara.

As the sun lifted itself awake before us, our balloon soared higher to gain breath taking views of the Mara plains. The whole river then came into view and stretched out before us for miles, i felt like in was in a BBC documentary when they show the Nile in an aerial shot. You suddenly get a great understanding of how vast the area is, with its never ending horizon. The balloon then lowered once again to find giraffe, elephant and buffalo underneath, all going about their morning business.

Our hour trip literally flew by and to my disappointment we were ready for landing. Our landing i will never forget, most passengers experience a gentle touchdown as if it were the most natural thing in the world. Whereas for us, we were suddenly told to “brace ourselves” as this was not to be a smooth landing, as we hit the ground we were pushed onto our backs and then dragged along the floor hitting three termite mounds along the way. The basket was in floods of laughter as we eventually came to a halt. Our captain was saluted for his efforts and we were shown to our Champaign breakfast which was set amongst the stragglers of wildebeest still crossing into Tanzania. My balloon experience left me with a feel of wanting more, i will defiantly be doing another one, one day.