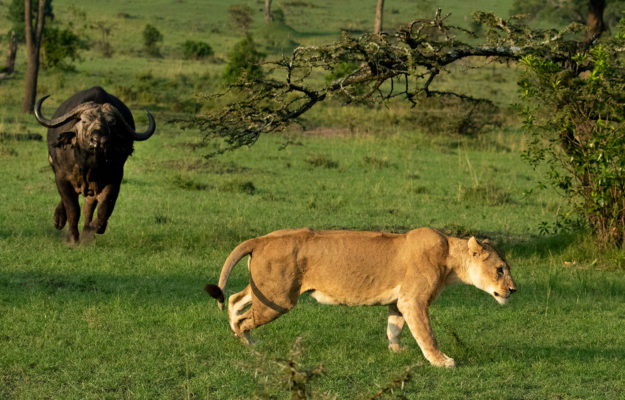 A morning out with our Photographer in Residence

0530 hrs; the steam had barely risen from my early morning coffee, when distant Lion roars punctuate the dense morning air. A brief discussion with Mike Dexter – Serian’s current “Photographer in Residence”, and we head briskly to the car park, camera gear in hand.

Greeted by Jonathan our guide we climb aboard. A specially adapted safari 4WD, the classic Toyota Land Cruiser, configured with plenty of handy points to shoot from. A row each, we settle quickly into our seats, arranging cameras, placing bean bags, . The quiet diesel sings into action and we’re off. Bumbling along, ears and eyes straining for a glimpse or sound of that Lion we had heard earlier that morning. Quiet whispers, we start talking settings; “Its low light, crank your ISO, then adjust as the light strengthens” Says Mike.

No more than two minutes from camp, we round the corner, to see a downcast Eland rush past with no concern for us. Our guides, Jonathan and Onyango chat excitedly; we can feel the energy. Everyone is focused, just the gentle rumble of the car. A hundred metres further along the lugga, a washed-out dry gully where we see into a small clearing. We can see why the Eland was so distraught, its calf had been taken down by three lionesses, we are only two kilometres from camp…

The story slowly starts to unfold, their breath still clouding the brisk morning air. These Lionesses breakfast had been interrupted by two old Buffalo bulls “Dagga boys” or “Brigadiers” that obviously had not appreciated the wake-up call.

Alone a fully-grown Bull Buffalo makes for quite a formidable foe, even for three full grown Lioness; here there were two. The Buffalo careered around harrying the lions. Establishing themselves in the bushes where the Lions had stashed the Eland, standing guard as they sought to establish if the youngster was still alive. The lionesses circle the old boys. Peeling off, a slight of hand as one dashes for a quick skirmish, another scuffles into the bushes to try and drag the Eland away.

Eventually the “Brigadiers” establish there is nothing more to protect, they saunter off. In the distance we can see “Lenkume”. The Boss, a handsome large maned Lion, King of the “River pride”, sauntering towards us. He had been looking on from the top of the neighbouring hill. Observing, watching, waiting, for the hub bub to die down, before nonchalantly joining the fray. Taking credit and claiming the meal.

The lionesses rush to retrieve their quarry, one of them tries to way-lay the boss, Lenkume… But his mind is set on breakfast and the smell of blood is in the air…

View all posts by Fraser Kennedy →