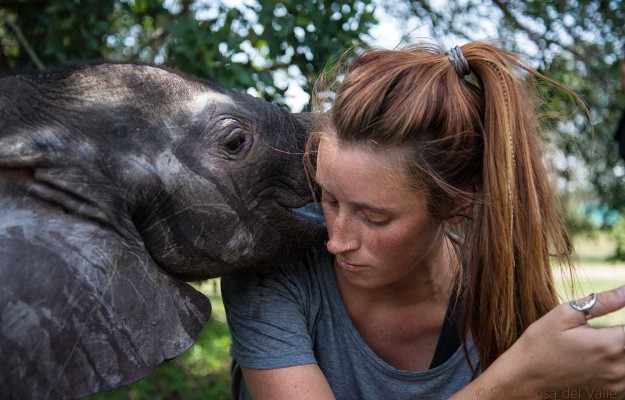 6.53 AM, Saturday morning, I’m settling into a strong coffee, the morning send off completed, the dawn chorus dissipating as the birds head off to feed. Sammy, one of our Serian mess attendants rushes in with news. “there’s a baby elephant trapped in a tree’s roots along the river bank”…

The river is the “Mara River” which meanders below Serian’s “Original” in the Mara North Conservancy. We rush down, Wifi  following us, wagging his tail joining our adventure. Sammy shows us where he is: tiny little thing, trapped in the roots of an Elephant Pepper Tree overhanging the river. The baby most likely slipped and fell; exhausted, from what must have been the longest night of his life. Fred jumps in, everything is so fast that I don’t really grasp if he is hugging him or grabbing him. With the help of Sammy and the others the baby is rescued from his confines. Confused he bolts in every direction… Wifi is excited but doesn’t know what to do. We all want to comfort the baby elephant, so small, maybe a meter high, he is less than a month old. Grunting, he chases us around, heartily curious about Wifi. 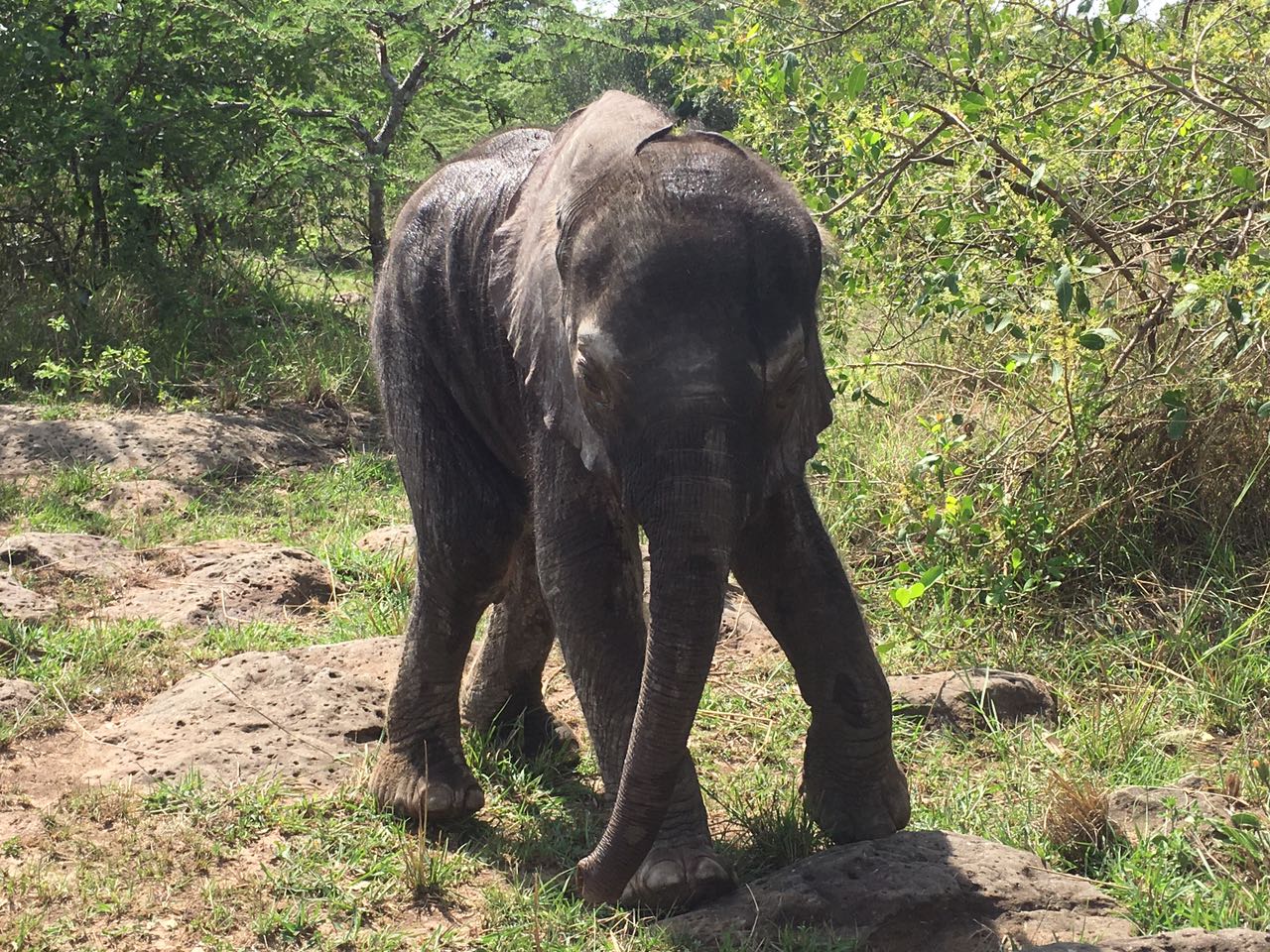 With no plan of action we start with phone calls looking for advice. Meanwhile we start looking for the mother, a stressed Elephant with no calf… A car sets off up river, scouts called into the hills overlooking camp. Fred walks the baby out to the plains. Away from anyone who might add scent to this baby more than we already have – if we find his mother then she might not recognize him. The baby is now clearly hungry and thirsty and he starts climbing on to us with his two front feet in search of something to suckle. We start him off with water – insatiable he doesn’t stop drinking. 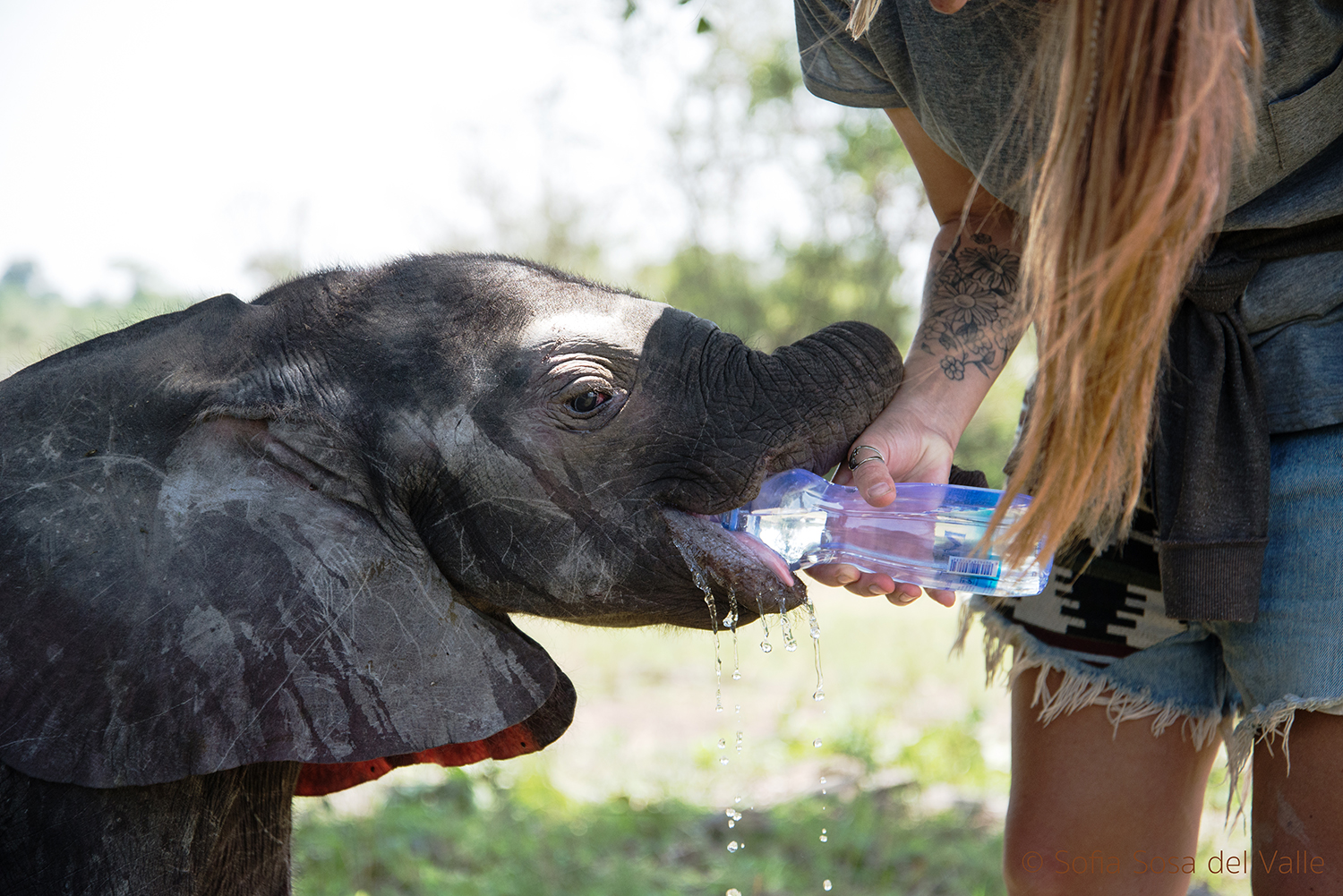 Having called for advice from the David Sheldrick Wildlife Trust and Mark at the Mara Elephant Project we formulate a plan. Option A is to find the baby’s mother. We receive a call that we’ve been waiting for, Jonathan –one of our mechanics from Ngare Serian on the other side of the river has seen a frustrated Elephant coursing around in a frenzy behind camp. This might be her. We set off for Ngare Serian. For those who know our camps you’ll understand this means crossing our 100 metre long swing bridge. Getting him across in a helicopter would be high risk and stressful. 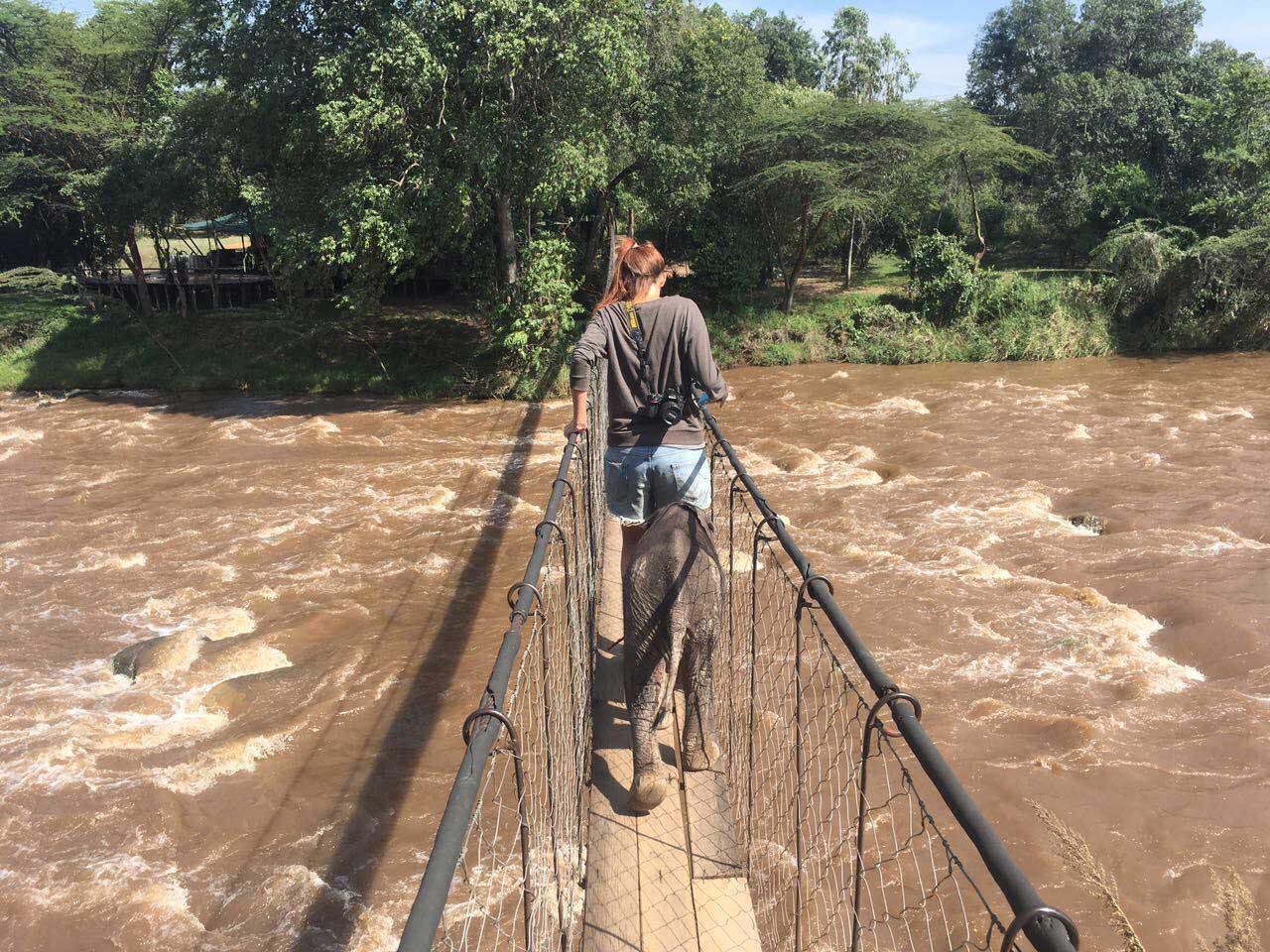 A most surreal image as I have ever seen. A tiny baby elephant was following me over the bridge. Wobbly yet trusting us he crossed safely to the other side.

The rear of Ngare Serian is thick with bushy euclea. We’re on foot looking for a distressed cow and we have her baby, but we believe it’s the correct thing to do.

Our aim is to head to The Nest a commanding view of the locale from our Tree House. The rationale – “if she hears his call we’ll be on higher ground”. At around 4 metres off the ground it is our “crow’s nest”. 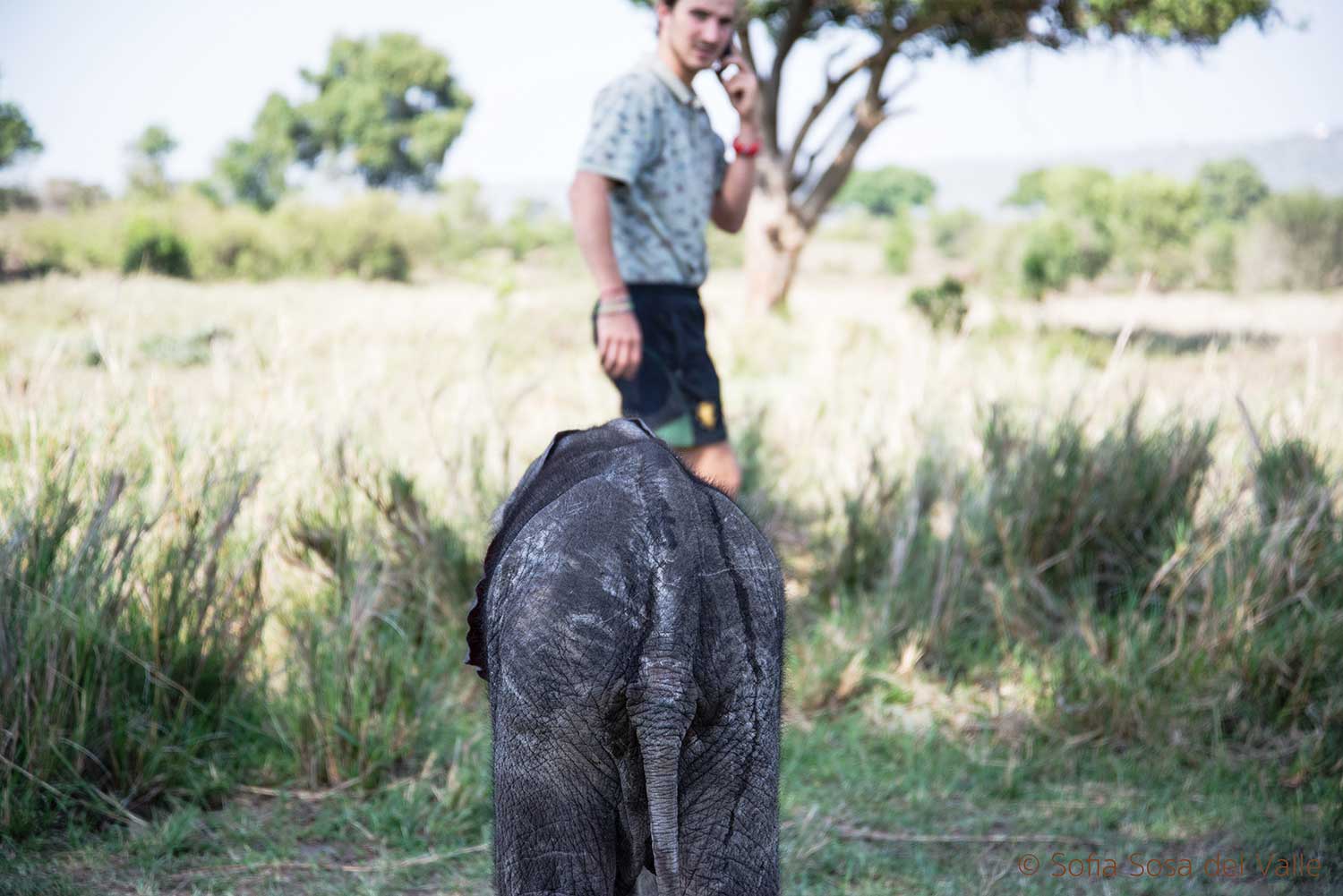 By now the Kenya Wildlife Service rangers, Marc Goss (CEO of Mara Elephant Project) have arrived. MEP rangers have added to the cars out scouting the far bank. Marc is flying a drone in search of a herd. Time is scooting by; soon we locate two herds. One of them a herd of bulls, the other, 4 mothers accompanied by their 4 young calves. It’s noon and we have to make a decision…. all the attempts have failed to find his mother. DSWT vets arrive; their professional opinion is to fly him to the elephant nursery nestled in the Nairobi National Park. Dame Daphne Sheldrick took nearly three decades to perfect the milk formula and complex husbandry necessary to rear an orphaned infant African elephant. 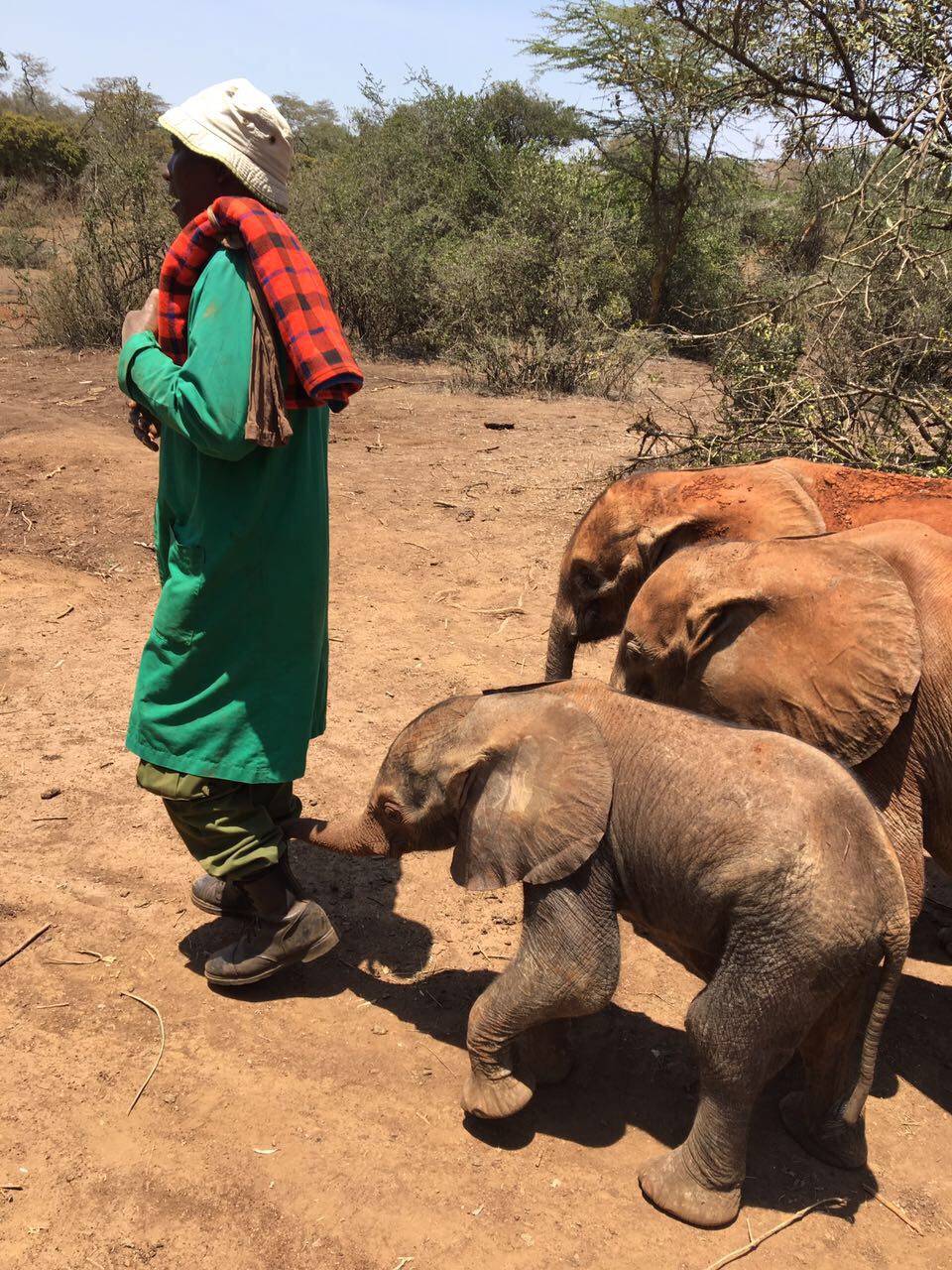 Nicknamed “Pili” after the tree whose roots cradled him in safety by the river, Pili is now nurtured in a healthy environment with other rescued elephant’s. With a 50-50 chance of making it, because of his age, this is the risky time pre teething where he still needs to take to DSWT’s curated milk formula. He is being taken care of by professionals; we hope one day to see him grow in to a handsome big elephant. – By Sofi Sosa Del Valle

If you would care to do so; please help by adopting an Elephant online.

Join us on safari, contribute and make a difference… View our Land of Giants itinerary.

View all posts by Sofi →