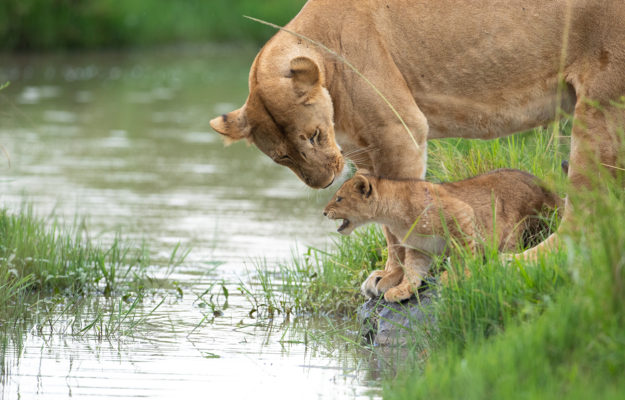 Being my first blog for Serian I would just like to say hello to all the readers and let you what an amazing first two days I have had.

Arriving in the Mara North Conservancy is nothing short of breath taking, landing in between towers of seemingly careless giraffe and sprinkles of Thompson Gazelles. After a short 30-minute drive we arrive at camp which is teaming with bird life. For those who love birding Serian ‘The Original’ camp would be an absolute treasure.

After going on three game drives I have already seen more than 6 separate lion sightings of the ‘River Pride’, antelope species and a successful hunt. However, the stand out for me so far has been the incredible weather producing powerfully dark and moody skies and a lion sighting from last night.

As we left camp, we went searching for the two lionesses who currently have 6 cubs between them, two are three months old and four are a little younger.

We managed to locate them very close to Serian ‘The Original’ sitting on a protruding termite mound. The cubs started to wake and play, producing amazing photographic opportunities, before the mother got up to have a drink. What followed could only be described as comical for those who watched and terrifying for one of the small cubs.

The lioness decided to jump a small section of the water about one meter wide to unwind on the other side, after being harassed by biting flies. One of the cubs had no issues following her, minus getting a little wet. The second cub however began to panic as the mother (now sleeping ten meters away) had seemingly abandoned it.

What we then witnessed for the next thirty odd minutes was the small cub running to the crossing point, hissing at the water and then retreating again to the safety of a termite mound with guests and the lioness watching on in slight confusion.

The first cub who had already crossed was getting bored and wanted to play… it crossed over twice to join the lost cub and try and convince it to come around to the safe side where mum had now lost interest.

What was funny for the guests was that the water source was only about twenty meters in length, with solid ground on both sides where they could have easily walked around, and after much heart ache, cute little contact calls and a lioness who may need the “mother of the year award”.
After all the excitement the pride walked off into the distance as the sun dropped behind the horizon and we returned to camp very happy!

A morning out with our Photographer in Residence
Cheetah vs Hyena with PIR: Lance van De Vyver