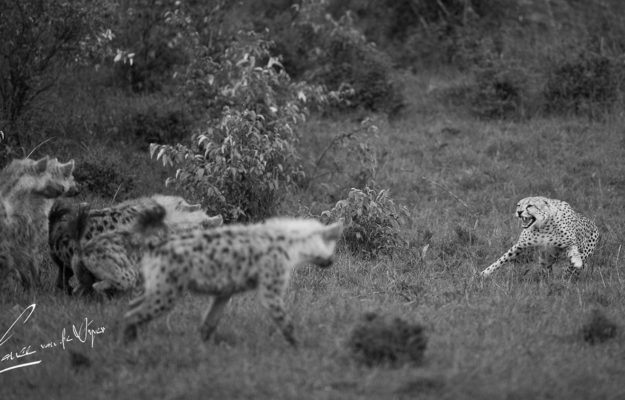 A couple nights ago I went out with some first-time safari goers. We were off to a rough start as a massive storm pummeled us about two minutes into the drive. At one stage the rain was coming down so hard we pulled over to wait it out, we couldn’t see two feet in front of us.

Many vehicles turned back to camp; I am very glad we didn’t.

Once we made it through the worst of the storm we started to head towards the center of the conservancy. Through the bush telegraph, rumors had spread of two cheetah brothers close by.

After about thirty minutes we came across a small herd of elephants with a tiny baby, so we stopped with them for a while. Eventually, the mother elephant walked around the corner and bumped into the two cheetah who were waiting out the weather in a small thicket. The mother elephant being nervous of her small calf proceeded to chase the two cats until she was satisfied that she had made her point; stay away!

At this stage photographically it was a tough sighting, but a special one. The light was very low due to the thick blanket of clouds and it was close to sunset. The two males then decided to get up and stretch their legs and do some scent marking. The low light did give us a chance to try some slow shutter techniques, as well as using our high ISO capabilities to freeze them whilst walking.

A small flock of Guinea fowl followed them harassing them and alerting the other animals of their presence.

After around ten minutes these alarm calls had enticed an entire clan of hyena. They came running into the cheetah, looking to see if they had made a kill. From here it was very strange. There was no food to steal, yet the clan continued to run at and surround the cheetahs who held their own for a small time before making a run for it. The hyenas chased them for about two kilometres before finally leaving them in peace. Suffice it to say it was an incredible sighting that will stay with the guests for years to come.