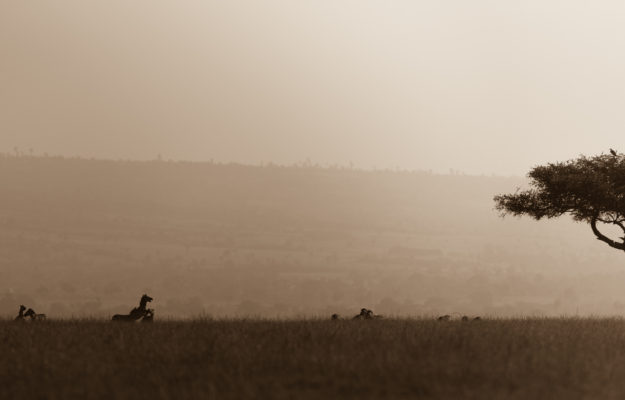 The power of stitching with PIR: Lance van De Vyver

As my month long stint here at Serian comes to an end, I would like to share with everyone one of my favourite techniques…..stitching.

Many travellers these days like to travel with less camera equipment where possible, especially where a 15kg weigh allowance is in play. This choice often results in them bringing one body and a zoom lens, and leaving their large primes at home.

For my a large prime lens results in the most beautiful images possible. With the amazing creamy backgrounds and superior sharpness, they are simply too good for me to leave behind.

This trip I travelled with three lenses, the canon 500mm f/4, 200mm f/2 and 16-35mm. These are two of my favourite primes for creating beautiful wildlife images with amazing image quality, sharpness and bokeh. However, not having the ability to zoom does have a few draw backs. The first is, what your lens gives you in terms of viewing angle is what you get….you may find occasionally a tail or the top of a tree is chopped off when composing the animal where you want it in the frame. And the other is sometimes you just get too close and cannot pull back.

There is a little trick however that makes these small issues disappear…..the art of stitching.

Stitching not only gives you the opportunity to create amazing panoramas, but also to slightly zoom in and out on a subject with a fixed focal length.

Lets first look at panoramas. Here in the Mara North Conservancy the landscapes are absolutely stunning. Even without an animal in sight a photographer could very easily spend all day taking beautiful images.

In this example (LION VIEW 1) the lioness is looking out over her kingdom. The image works, but is a little weak in letting you know the vastness of the area. By shooting a second image next to the original (LION VIEW 2) and then stitching the two together, the image becomes much stronger as the lion is now no longer the main subject of the picture.(lion view 3)

This second example is of the same scene (LION GROUP 1). The original image is not a bad one, but it is a little tight for story telling. You don’t get a sense of the beautiful location and the crop is a touch too tight for the lionesses tail. The panorama is made of 6 images, the main image of the lions, three in front of the lioness and two behind. (Lion group rest, then pano)

This elephant cloud image is made from two pictures shot with the 200mm. (ELEPHANT CLOUDS).

After finding this small herd of elephants I noticed the incredible skies with light rays behind them. The reason I chose the 200mm over the 16-35mm is that the longer primes compress the subject and their background, otherwise known as foreshortening. This essentially means that we can make the elephants appear  “closer” to the sky. As you can see from the original image I could only get the three elephants together in one single shot (ELEPHANT CLOUDS 2). This image is nice, but the vastness of this wide open space again needs a bit more breathing room and a wider viewing angle to really tell a story. The fact that a fourth elephant was found on the right is a nice bonus, but the image would have worked without it as well.(ELEPHANT CLOUDS 3).

This next example of the three lions in a tree is a slightly different example.(lion tree)

The image is not really a panorama as such, but an example where I could not shoot the lions playing in the tree with a wide angle as there was other vehicles in the way. At 35mm the tree was too far, and cars well in the shot. (lion tree 35mm)

At 200mm I could only get roughly a third of the tree in at once. So stitching saved the day! (lion tree top, mid, bottom)

So how do I stitch? I use Adobe Lightroom Classic CC. In my opinion this is the best piece of editing software for most photographers, as not only can you stitch and edit inside the program, but it is also where you catalog and display your images as well.

The first steps are obviously in camera. You must ensure your settings are the same for each of the shots.  After focussing on the main subject I then use the Auto Exposure lock button to ensure all the camera settings stay the same. I then shoot the main subject followed by the rest of the sequence. (I start on the main subject in case it decides to move and therefor I get the insurance shot).

Important things to remember when shooting the sequence are the focus must remain in the same place (One Shot Canon, AF-S in Nikon are the easiest for this). I shoot back button focus in Servo, so I simply stop focussing after obtaining the original focus. You also need to have an overlap for the software to be able to recognise the area to stitch. The more overlap you give the more successful the stitches become, however lightroom is so good these days around 5-10% will be enough.

Once you have imported your images into lightroom the rest is very simple. You highlight the selected images (screenshot 1). I then take them to the develop module and apply a lens correction to it (screenshot 2). This gets rid of any natural vignetting your lens may have which will cause a dark band in your stitch.

Once you have done this, simple push Ctrl+M on windows or Cmd+M on a mac which will load the images into the stitching menu. (screenshot 3)

As you can see the preview has overlayed the images and shows you some white space around the edges where they don’t line up perfectly. I like to use the perspective application for long lens shooting, and I then apply an auto crop and hit merge. The stitch can be very quick or take a few minutes depending on your computers specs. (screenshot 4)

The final image is ready to edit. (stitch 5)

This is a fantastic technique to practice and play with, and may help you save an image or two in the future.

Photography After Dark at Serian

Cheetah vs Hyena with PIR: Lance van De Vyver
“One in a Million Mara” with PIR: Penny Robartes