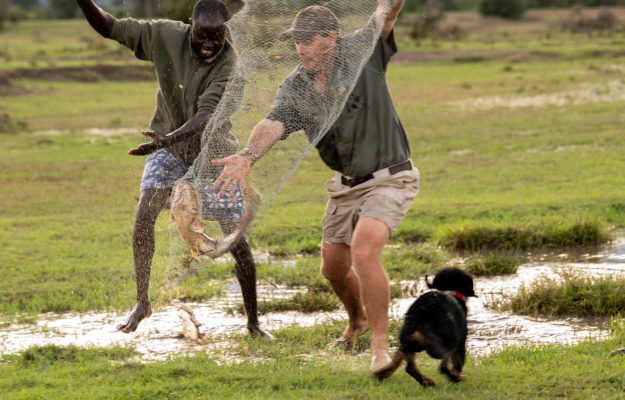 The Magic Fishes of the Mara

One thing that always amazes me about Serian is that Nature always has another surprise up her sleeve!

My recent stay coincided with the arrival of the Short Rains.  Each afternoon we watched as the sky turned from sunny baby blue to deep, brooding indigo, laden with cloud and building to an epic downpour.

The Mara River rose and churned, heaving fully grown hippos downstream and cutting off roads in and out of Mara North.  The luggas that crisscross the plains filled with runoff and became ponds and small tributary streams, feeding the rushing river still more.  Our vehicles skidded, fishtailed and were sucked into the black cotton soil.

Yep, we’ve seen all that before …but what none of us – guests and guides alike – had ever witnessed were the hundreds of massive catfish – or mudfish as the Maasai call them – that appeared like magic out of the bare earth!

Of course it wasn’t magic that brought the fish, but incredible evolution: as last year’s rains left and the earth dried out, the catfish dug themselves beneath the desiccated earth.  They stayed buried for all those months in a state of suspended animation, covering themselves in mucus so they can still breathe by absorbing oxygen through their permeable skin in a process called cutaneous respiration – amazing!

So when the rains returned suddenly there they all were, thrashing their way towards the river and turning the makeshift ponds into a feeding frenzy for storks…and Serian staff!

Adrian, Johnmark and Okech went on a fishing mission to give the staff a dinner treat.  The rest of us howled laughing for three hours as they were outwitted by the wily fish. We lost count of the times they ended up empty handed, nipped on the ankles or face down in the water while all the contraptions they fashioned to catch them failed. Enthusiastic ‘help’ from Widget and WiFi was no good either.

The storks, who had gathered to gorge, looked on in disbelief at our antics.  They simply stood serenely on one leg and waited to grab a fish as it passed by – that they got plenty just rubbed it in!

Finally our guys got the hang of it, and as darkness was falling, we returned to camp with three enormous catfish, and sore faces all round from laughing so much!

River Fishing along the Mara river

Serian: Time is the Secret