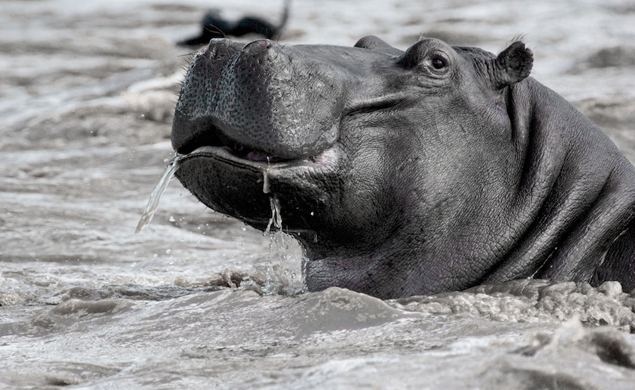 The word “hippopotamus” is derived from the ancient Greek ἱπποπόταμος, hippopotamos, from ἵππος, hippos, “horse”, and ποταμός, potamos, “river”, meaning “horse of the river”.[7] In English, the plural is hippopotamuses, but hippopotami is also used;[8] hippos can be used as a short plural. Hippopotamuses are gregarious, living in groups of up to 30 animals; such a group is called a pod, herd, dale, or bloat.

The hippopotamus is semi-aquatic, inhabiting rivers, lakes and West African mangrove swamps [3] where territorial bulls preside over a stretch of river and groups of 5 to 30 females and young. During the day they remain cool by staying in the water or mud; reproduction and childbirth both occur in water. They emerge at dusk to graze on grass. While hippopotamuses rest near each other in the water, grazing is a solitary activity and hippos are not territorial on land.

Despite their physical resemblance to pigs and other terrestrial even-toed ungulates, their closest living relatives are cetaceans (whales, porpoises, etc.) from which they diverged about 55 million years ago.

The hippopotamus is recognizable by its barrel-shaped torso, enormous mouth and teeth, nearly hairless body, stubby legs and tremendous size. It is the third largest land mammal by weight (between 1½ and 3 tonnes), behind the white rhinoceros (1½ to 3½ tonnes) and the three species of elephant (3 to 9 tonnes). The hippopotamus is one of the largest quadrupeds (four legged mammals).[6] Despite its stocky shape and short legs, it can easily outrun a human. Hippos have been clocked at 30 km/h (19 mph) over short distances. The hippopotamus is one of the most aggressive creatures in the world and is often regarded as one of the most dangerous animals in Africa. There are an estimated 125,000 to 150,000 hippos throughout Sub-Saharan Africa; Zambia (40,000) and Tanzania (20,000–30,000) possess the largest populations. A hippo’s lifespan is typically 40 to 50 years. 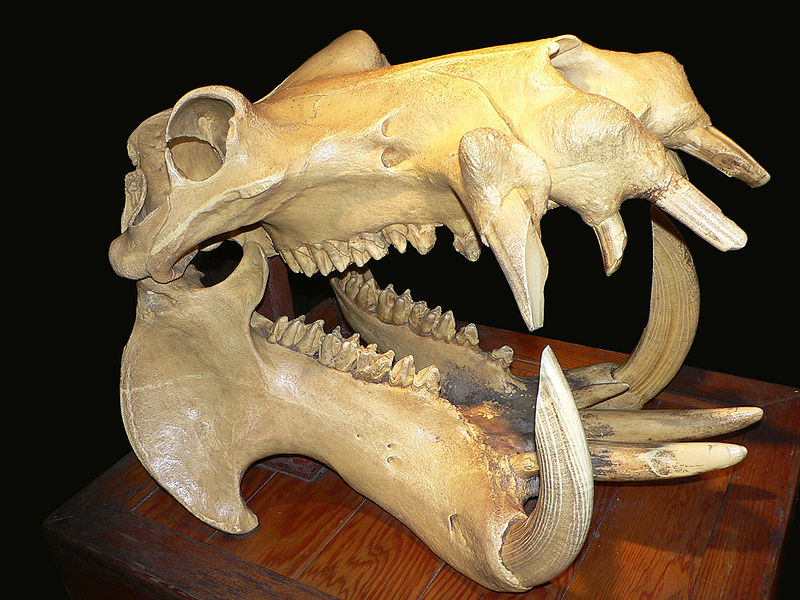 A drawing of a hippopotamus skeleton

The eyes, ears, and nostrils of hippos are placed high on the roof of the skull. This allows them to be in the water with most of their body submerged in the waters and mud of tropical rivers to stay cool and prevent sunburn. Their skeletal structure is graviportal, adapted to carrying the animals’ enormous weight. Hippopotamuses have small legs (relative to other megafauna) because the water in which they live reduces the weight burden. Unlike most other semi-aquatic animals, the hippopotamus has very little hair.[10]

Their skin secretes a natural sunscreen substance which is red-colored. The secretion is sometimes referred to as “blood sweat,” but is neither blood nor sweat. This secretion is initially colorless and turns red-orange within minutes, eventually becoming brown. Two distinct pigments have been identified in the secretions, one red (hipposudoric acid) and one orange (norhipposudoric acid). The two pigments are highly acidic compounds. Both pigments inhibit the growth of disease-causing bacteria; as well, the light absorption of both pigments peaks in the ultraviolet range, creating a sunscreen effect. All hippos, even those with different diets, secrete the pigments, so it does not appear that food is the source of the pigments. Instead, the animals may synthesize the pigments from precursors such as the amino acid tyrosine.[35]

Hippos spend most of their days wallowing in the water or the mud, with the other members of their pod. The water serves to keep their body temperature down, and to keep their skin from drying out. With the exception of eating, most of hippopotamuses’ lives —from childbirth, fighting with other hippos, and reproduction— occur in the water.

Hippos leave the water at dusk and travel inland, sometimes up to 8 kilometers (5 mi), to graze on short grass, their main source of food. They spend four to five hours grazing and can consume 68 kilograms (150 lb) of grass each night.[44] Like almost any herbivore, they will consume many other plants if presented with them, but their diet in nature consists almost entirely of grass, with only minimal consumption of aquatic plants.[45] Hippos have (rarely) been filmed eating carrion, usually close to the water. There are other reports of meat-eating, and even cannibalism and predation.[46] The stomach anatomy of a hippo is not suited to carnivory, and meat-eating is likely caused by aberrant behavior or nutritional stress.[10]

The diet of hippos consists mostly of terrestrial grasses, even though they spend most of their time in the water. Most of their defecation occurs in the water, creating allochthonous deposits of organic matter along the river beds. These deposits have an unclear ecological function.[45] Because of their size and their habit of taking the same paths to feed, hippos can have a significant impact on the land they walk across, both by keeping the land clear of vegetation and depressing the ground. Over prolonged periods hippos can divert the paths of swamps and channels.[47]

As with fish and turtles on a coral reef, hippo occasionally visit cleaning stations and signal by wide-open mouth their readiness for being cleaned of parasites by certain species of fish. [48]

Studying the interaction of male and female hippopotamuses has long been complicated by the fact that hippos are not sexually dimorphic and thus females and young males are almost indistinguishable in the field.[49] Although hippos like to lie close to each other, they do not seem to form social bonds except between mothers and daughters, and are not social animals. The reason they huddle close together is unknown.[10]

Hippopotamuses are territorial only in water, where a bull presides over a small stretch of river, on average 250 meters in length, and containing ten females. The largest pods can contain up to 100 hippos. Other bachelors are allowed in a bull’s stretch, as long as they behave submissively toward the bull. The territories of hippos exist to establish mating rights. Within the pods, the hippos tend to segregate by gender. Bachelors will lounge near other bachelors, females with other females, and the bull on his own. When hippos emerge from the water to graze, they do so individually.[10]

Hippopotamuses appear to communicate verbally, through grunts and bellows, and it is thought that they may practice echolocation, but the purpose of these vocalizations is currently unknown. Hippos have the unique ability to hold their head partially above the water and send out a cry that travels through both water and air; hippos above and under water will respond.[50]

Female hippos reach sexual maturity at five to six years of age and have a gestation period of 8 months. A study of endocrine systems revealed that female hippopotamuses may begin puberty as early as 3 or 4 years of age.[51] Males reach maturity at around 7.5 years.

Mating occurs in the water with the female submerged for most of the encounter, her head emerging periodically to draw breath. Hippos are one of the few mammals that give birth under water, along with Cetaceans and Sirenians (manatees and dugongs). Baby hippos are born underwater at a weight between 25 and 45 kg (60–110 lb) and an average length of around 127 cm (50 in) and must swim to the surface to take their first breath. A mother typically gives birth to only one hippo, although twins also occur. The young often rest on their mothers’ backs when in water that is too deep for them, and they swim underwater to suckle. They also will suckle on land when the mother leaves the water. Weaning starts between six and eight months after birth and most calves are fully weaned after a year.[10]

Like many other large mammals, hippos are described as K-strategists, in this case typically producing just one large, well-developed infant every couple of years (rather than large numbers of small, poorly developed young several times per year as is common among small mammals such as rodents).[10][51][52]

Hippopotamuses are by nature very aggressive animals, especially when young calves are present. Frequent targets of their aggression include crocodiles, which often inhabit the same river habitat as hippos. Nile crocodiles, lions, and spotted hyenas are known to prey on young hippos.[53] Hippos are very aggressive towards humans, whom they commonly attack whether in boats or on land with no apparent provocation.[54] They are widely considered to be one of the most dangerous large animals in Africa.[55][56]

To mark territory, hippos spin their tails while defecating to distribute their excrement over a greater area.[57] Likely for the same reason, hippos are retromingent— that is, they urinate backwards.[58]

Hippos rarely kill each other, even in territorial challenges. Usually a territorial bull and a challenging bachelor will stop fighting when it is clear that one hippo is stronger. When hippos become overpopulated, or when a habitat starts to shrink, bulls will sometimes attempt to kill infants, but this behavior is not common under normal conditions.[52] Some incidents of hippo cannibalism have been documented, but it is believed to be the behavior of distressed or sick hippos, and not healthy behavior.[10]