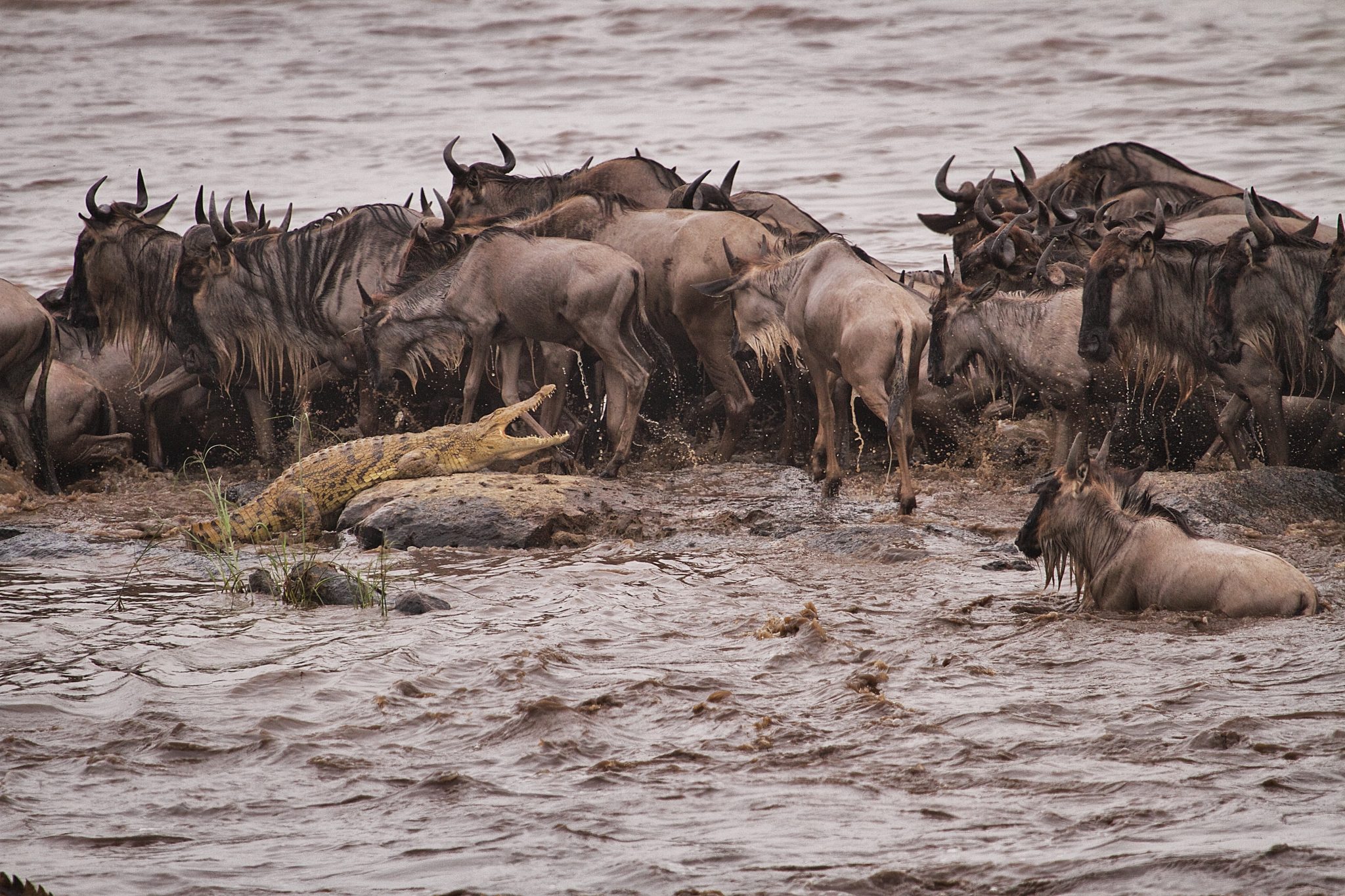 One common misperception is that ‘the migration’ connotes the renowned wildebeest river crossings. This, however, is only a small part of their annual migratory cycle. There is also the birthing season, the rut, and of course their movement up the length of the Greater Serengeti Ecosystem, and back.

Their reach spans Kenya’s Masai Mara at its northernmost tip, the full stretch of the Serengeti, and all the way down to the limits of the Ngorongoro Conservation Area in the south. Our camps are situated to make the most of the two main spectacles: the river crossings, and the birthing season.

WHY DO THEY MIGRATE ANYWAY?

Their incessant movement is governed by the search for good grazing – and this, in turn, is determined by rainfall.

Here is a quarterly summary of their average year:

Up in Kenya’s Mara North, the Loita population of roughly 30,000 stages its birthing season, on a scale much smaller than their cousins down south.

In Tanzania, this takes place on the southernmost tip of Serengeti’s short-grass plains, not far from Ngorongoro Crater. The November-December short rains ensure that there are plenty of fresh new shoots, and the fertile volcanic soil yields highly nutritious grazing – which is instrumental in getting the newborn calves up and running.

Between three and four hundred thousand calves are born in under 4 weeks, usually between late January and February. Newborns can be up on their feet in just three minutes, and the average is seven minutes: a handy adaptation for creatures that are constantly on the move.

The reason for such phenomenal numbers born in such a condensed time slot is to glut the predators: a certain percentage of the calves fall prey to cheetah and hyena especially, but the rest survive by sheer dint of population.

This also keeps the predator population from decreasing: if the birthing were staggered over a greater period of time, it would be a food-source that could sustain greater numbers – but as it is, this ‘feast or famine’ scenario prevents that possibility.

THE RUT ON THE MOVE

In April, Kenya’s wildebeest move onto the Loita Plains for the mineral-rich soils, lingering until June when they move back toward the private conservancies.

Meanwhile in Tanzania, the long rains in March and April keep the herds in Southern Serengeti, while the calves gather strength for the move. By May, the dry weather spells no more grazing, and by the end of the month, the last of the herds have left.

Their route weaves through Kusini, up to the long grass in Moru – then over the Grumeti River, and upward to Northern Serengeti.

Their mating season – ‘the rut’ – happens on the move. With a few months’ good grazing under their belts, the males are in peak reproductive condition. Bulls carve out temporary territories on the run, and inseminate around 600,000 cows in less than a month.

The intensity of the competition for females during the rut is part of the reason there is so little distinction between the sexes: males drive other males out of their territory, into areas of poorer grazing, making them easy prey for predators. To protect their male offspring, females grow horns and faux penile tufts.

By ‘disguising’ as females, young bulls can stay undetected in another male’s harem – and sneakily inseminate the females while the dominant male’s back is turned – hence the high success rate of the rut.

This is the time of year when the Kenyan Loita population is reunited with the rest of the herd, as they periodically cross the border in search of prime grazing.

By July, the herds have arrived in Northern Serengeti. Another widespread misunderstanding is that the wildebeest all cross the Mara River at once, going one direction, and not looking back.

In fact, they stay in this general area for up to 4 months. The mega-herd factions into smaller groups, and these circulate back and forth across the Mara River, in and out of Kenya, constantly in search of grazing and avoiding predators.

They use the same crossing points year after year, some of which are nice and easy: gentle-sloping riverbanks, shallow water, minimal crocodiles… Others, however, comprise impossible cliffs, deep, strong current, and slippery rocks and jaws of death. The casualties become feasts for vultures – and in fact, scavengers are said to dispose of 70% of carcases throughout the migratory route.

By November, the short rains have arrived in central Serengeti, and the females are heavily pregnant. Late October to November is an incredible time of year to see the last enormous crossings as the herds start their migration south, leaving the Loita herd behind in Kenya.

Their high shoulders and sloping backs are an ideal locomotive design for covering long distances at relative speed, and flaps on their nostrils filter the dust stirred by the thousands that have gone before them. Interestingly, they follow scent: glands in their front hooves secrete a pungent odour as they canter, keeping the herds together.